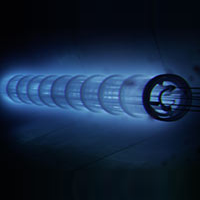 When ionizing radiation interacts with an object, energy is transferred from the radioactive material to the exposed object. The quantity that describes this transfer of energy is defined as absorbed dose and is measured by the concentration of absorbed energy.

The basic unit for radiation dose is expressed in terms of absorbed energy per unit mass. Following the International System (SI), this basic radiation unit for absorbed dose is defined as the Gray (Gy). The Gray is equivalent to the absorption of 1 Joule (J) of energy per kilogram (kg) of irradiated material. The Gray is commonly used for reporting absorbed dose in all types of ionizing radiation dosimetry, such as irradiation, due to gamma rays or high speed electrons.

Prior to the introduction of the SI unit, Gray, radiation dose was measured by a unit called the rad. The rad was an abbreviation for radiation absorbed dose. A rad is defined as the absorption of 100 ergs of energy per gram (g) of irradiated material. Although the Gray is the most common term used, either unit can be accurately used to express the amount of radiation absorbed by an object.

Both radiation units describe the amount of absorbed dose deposited into an object. Absorbed dose is a macroscopic quantity and it applies to the average amount of energy absorbed by the exposed object.

Background Radioactive material of natural origin is abundant and varies widely in both type and amount. The energy from these materials, plus that of cosmic or cosmogenic origin, is called background radiation. Artificial radioactivity is the result o

Industrial radiation facilities are designed to achieve a dose uniformity inside a process load between the sterilization (minimum) dose and the maximal acceptable dose established during the validation process. To demonstrate continued effectiveness o

This TechTip will explain the differences between single lot validations and full validations of minimum sterilization dose, and outline the advantages and disadvantages of each of these approaches to dose setting.

Overview of an E-Beam Irradiation Validation For Healthcare Products

Prior to beginning routine processing with electron beam (E-beam) irradiation, a product with a sterile claim needs to complete a validation process to ensure the sterility assurance level claimed is achieved.