HALT Testing is a highly aggressive temperature and vibration cycling process which is used very early in the design stage of the product life cycle.

A major telecoms company were performing a series of various tests on a complex and high-value product, which consisted of several large plug-in cards secured to a large backplane. Initially, extensive design verification testing was performed to qualify and validate the product. No problems or failures were found during this test process. Afterward, several complete units were sent to external sites for alpha/beta testing. This type of evaluation lasted for several months and was completed successfully without any failures.

The next stage was the final qualification where the product was subjected to HALT at the STERIS test laboratory. During the fast ramp temperature excursions from the Upper Operating Limit (UOL) to the Lower Operating Limit (LOL), failures started to occur causing major functional errors.

Failure analysis found that an inner layer etch was defective, opening and closing like an electronic switch. This failure was caused by a manufacturing error in the backplane and exposed by HALT during the high to low-temperature fast ramp rates causing the inner layer etch to expand and contract. When the product was brought back to ambient temperature it performed correctly. 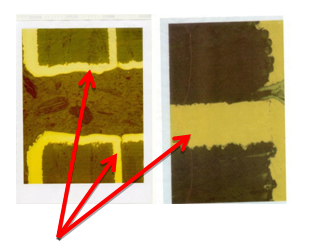 Arrows point to breaks on inner layer PCB etch due to insufficient solder caused during manufacturing process. These flaws were exposed by STERIS’s HALT testing.

The result was a major engineering change on several hundred backplanes. If the product had not been exposed to a HALT, it would have been shipped with the latent defect and possibly resulting in immediate field failures a total product recall. The company subsequently acknowledged that the testing could have saved millions of dollars.

Purpose In a sterilization process where biological indicator (BI) sterility results are used as part of product release criteria, the BIs shall be procured from an approved supplier with a minimum population of test organisms defined. The population o

Screening for Adverse and Inhibitory Substances

The Basics of Bioburden Testing

What is bioburden? Bioburden is the quantity and types of native bacterial and fungal flora present on or in a device, substrate, or chemical (test unit). Bioburden plays a large role in determining what is necessary to achieve sterility, and can impac