Earlier this year, STERIS Applied Sterilization Technologies (AST) announced several expansion projects throughout our global sterilization and laboratory network.  We’re excited to provide updates on these projects as part of our commitment to providing both global and local Customers with processing capacity.

The Ontario, California facility held a grand opening ceremony for the new E-beam operations in October and is now processing on a routine basis.  The E-beam operations were added to complement the facility’s two existing gamma irradiators.

Construction is underway for the Chester, New York electron beam operations, with processing expected to commence in mid-late 2017.  The E-beam operations are an addition to the facility’s three existing gamma irradiators.

A second E-beam system is being added to the Tullamore, Ireland facility’s existing E-beam and EO operations. The facility is also expanding its on-site microbiology laboratory to further support Customers’ validation and testing needs. The facility also recently added a small volume EO chamber to support its existing operations. Both the E-beam and laboratory expansions will be operational in mid-2017.

The Bradford, UK gamma processing facility commenced operations for its new gamma pallet irradiator with a grand opening ceremony in June 2016. The new pallet irradiator, an addition to the facility’s existing gamma operations, operates via a fully automated warehouse system in a high bay warehouse with the capacity to hold over 1,500 pallets.

In the Netherlands, the Venlo facility is expanding its existing ethylene oxide operations by adding three 32-Euro pallet EO chambers, as well as additional warehouse space and conditioned storage. The new chambers will be available for processing in late 2017. 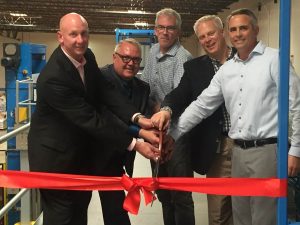 Want to stay up to date with the latest TechTips & News from STERIS AST?